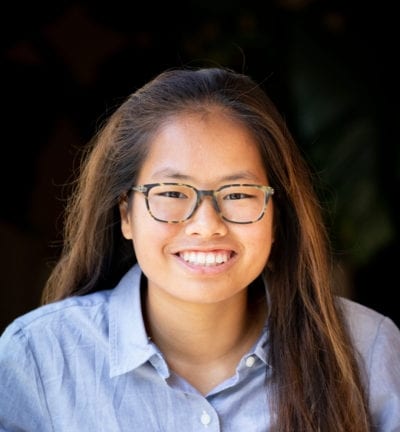 * A version of this blog was also posted on the U.S. Department of Education’s Office for Special Education and Rehabilitative Services blog in recognition of LD Awareness Month in 2020.

My self-advocacy is a choice. Not a choice I wanted to make, but one I had to make and continue to make every day. The journey was provoked by a defining moment in my first year of college. A psychologist told me, referring to my recently diagnosed ADD—and not-yet identified dyslexia—that I would “just have to settle with being less than,” a feeling I had already felt for so long. It was from this critical juncture that I realized I could not, and would not, allow myself to be limited by how others defined my learning differences. I dedicated myself to the promise that no one should have to go through what I had gone through, and this vow led me to advocate for myself and others. My mission to advocate for and bring awareness to learning disabilities was a risk built on years of reservation and restraint.

Thanks to the protections afforded by federal law, many students with learning disabilities are identified early but are shepherded into stigma-inducing programs based on their difference and their label. Conversely, untold numbers of students do not get identified early enough and go years without a label and without words to describe their struggle. Due to the circumstances of the former, I belonged to the latter. Our awareness of learning disabilities is predicated on how people with learning disabilities are perceived and the conclusions drawn from those perceptions. The othering of people who learn differently advances a limited definition and in turn a myopic awareness of the true diversity of learning differences.

Though intimately aware of my learning differences since first grade, I othered myself. I needed to fit in. At the cost of my mental and emotional well-being in a world that favors product over process, I sought academic perfection. I denied myself the process of learning—however different my process may have been—to maintain the facade of effortless hard work. Because of the narrow perception of learning disabilities, those of us who think and learn differently often believe that we are alone in our struggles. At the same time, so many of us think we are safer when we keep these struggles to ourselves. We live in a paradox. I lived in a paradox. By the end of high school, however, my struggles overtook my ability to mask them.

Asking for help meant taking a risk. For me, that first risk was finally seeking a diagnosis. Ultimately, however, the diagnosis only gave me a vocabulary. My problems now had a name, but I still needed to ask for help. I still needed to advocate. It meant having conversations with people who disagreed with me and even some who refused to understand me. After all, that’s what advocacy is: having conversations with people who do not already agree with you.

Following that critical moment with the psychologist in my first year of college, I sought every opportunity to spread LD awareness on campus. I pushed myself to have more conversations with professors and peers, I joined an LD/ADHD mentoring program, and I advocated for myself, locally and nationally. I found myself speaking with reporters from the Chronicle of Higher Education and the Seattle Times and advocating on live national news. Despite the positive public attention I received for advocating for myself and others, I still doubted myself. I still held perceptions about my LD that made me question whether I belonged in the environment I chose for myself.

On the outside, I was pioneering my way through an independently planned major in Neuroscience, pursuing extracurricular experience mentoring middle school students with learning and attention issues, and on my way to graduate school. Beneath the surface, I still believed that learning differences neither existed nor belonged in academia. I doubted whether my next step really could be graduate school. I wondered, if learning disabilities existed and were so harmful, how could so many people get into academia and do well? Until recently there has not been a language or space to talk about them. People with learning disabilities have struggled silently for so long, that not talking openly about learning disabilities means more students repeat the cycle of stigmatization and internalized ableism.

For me, internalized ableism manifested as feeling like the academic accommodations I received gave me an unfair advantage. I resented them but knew I needed them to have a fair chance at doing my best. Wanting to start a conversation with my professors, but mostly to ameliorate the sticky feelings I had, I chose to disclose my dyslexia. By disclosing, I risked being viewed as lesser-than. I risked tarnishing a reputation I had yet to establish for myself. To my surprise, however, some professors took this as an opportunity for them to share their own experiences. When they shared, they often avoided or struggled to articulate their challenges with specific language. In hindsight, I now realize that my professors did not have the language to describe the struggles we share.

Labels, as an outcome of the space and language to talk about learning differences, are a product of socio-economic privilege. Labels are also a privilege of the times. My professors had grown up in a time where learning disabilities if they were going to be identified, were so much more than trivial labels. They were life sentences of stigmatization, inadequacy, and failure. In some instances, these labels became the justification for institutionalization. We now live in times where these labels can be advantageous units of social transmission. I have now come to see my dyslexia and ADHD as an opportunity to educate others about my experience and bring awareness to hidden challenges people with learning disabilities face.

Sharing my experience openly is something I never imagined I would do. It is an ongoing project of self-exploration, self-knowledge, and self-awareness. I am continually learning to take ownership and pride in my differences. It is because of the advocacy, openness, and risk-taking of many before me, that we now have space and a common language to describe learning differences and our experiences. Others’ advocacy has helped me, and I hope my openness and advocacy can help others, too.

Understanding and Navigating Through Life with a Disability